Currently, Russell is the CEO of Drop Software Inc (“Drop”).

At Drop, he leads a team of designers, human-computer interaction researchers, and engineers who are obsessed with the future of spatial computing. The team at Drop is investigating the following question, “as our iPhones become ineffective for information discovery and we move into a post-smartphone world, how will we navigate the immersive web?”

Today, Drop provides an immersive internet searching and browsing experience designed for virtual reality users. It is one of the most popular and top downloaded VR titles on the HTC Vive – the leading virtual reality headset. It is commonly referred to as the “Google Chrome for VR.” Drop is venture backed by HTC, one of the world’s leading consumer technology companies, MACRO, Autochrome Ventures, Backstage Capital, and Matter Ventures.

He has been mentioned and featured in several publications such as the New York Times, Black Enterprise, and Entrepreneur. He was most recently included in Entrepreneur as one of the “50 Most Daring Entrepreneurs in 2018.”

He has been recognized by Google as a 2019 Google Next Gen Policy Leader. Google Next Gen Policy Leaders are at the forefront of tech and racial justice, and have distinguished themselves in business, public service, content creation, education, and activism. Next Gens connect the dots between tech policy and the opportunity and justice issues that drive today’s leaders.

Before creating Drop, he spent his early career as an investment banking analyst at two leading Wall Street firms. After a close call with mortality in a near-fatal accident, he decided to revisit his interests in design, art, and technology.

Russell lives and works in Oakland, California. Most of his free time is spent hiking, practicing vinyasa yoga, or playing chess.

He graduated from Morehouse College with a B.A. in Economics. 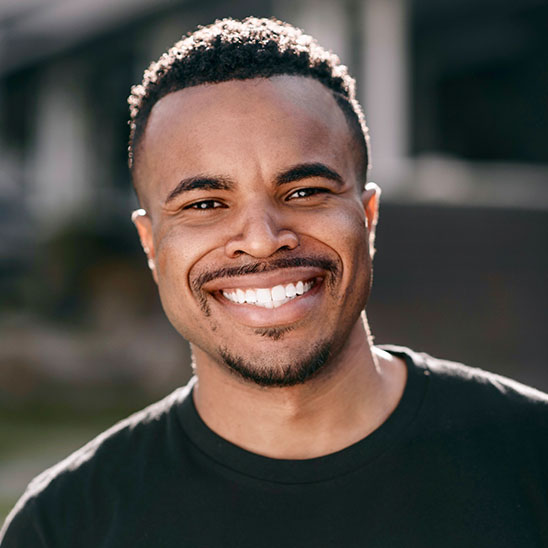